One more thing off the bucket list, now I’ve tried forging. Lemme tell you, it’s a whole lot more work than it seems like in films. Guess I shoulda figured that one out though. Either way, it was a ton of fun, and given the time I will pull out our brake drum forge again.

The forge was created using a brake drum, scrap tubing, some chicken wire and a small regulator that we happened to have on hand. The stand was welded together and the cheapest coal that we could find was purchased, and the forge was hooked up to the compressor and regulated to a slow but steady stream of air that kept the coals hot. The temperature was never recorded, but it was hot enough to melt a piece of steel, so at least 1500C (2700F). 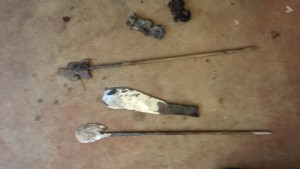 After several attempts at forging some scrap steel that we had, we were able to hammer out a couple interesting pieces that could be turned into finished pieces after a lot more work.

As a purely experimental project, it was a lot of fun and a success. We were able to forge steel, and ended up with some rough forgings.