I always thought swords were kinda neat. But, what’s cooler than a sword? One that you made yourself, that looks awesome! This was a ton of work, but totally worth it in the end. This project started with a trip to King Richard’s Faire, where among other memorabilia, you could purchase a sword. At the time, I wasn’t yet 18, and wanted a sword of my own. So, naturally, since I couldn’t buy one at the faire, I decided to make my own. 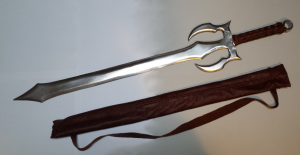 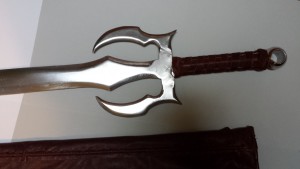 Starting from a piece of 1/4″ plate steel (purchased from a local Sears Hardware) I cut out the rough shape. The saws-all was my favorite tool for this process, and I still spent a couple of hours cutting with it. The hilt was roughed out as two separate pieces, and the handle was another separate piece. These were welded on after the shaping and profiling of the blade. 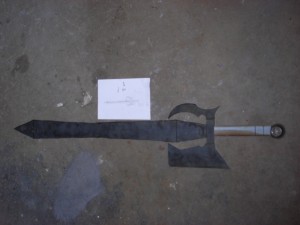 Next began the long process of grinding away material until I had the shape that I wanted. I have to admit, that a friend of mine came up with the shape, and I embellished it slightly and decided to make it symmetrical. 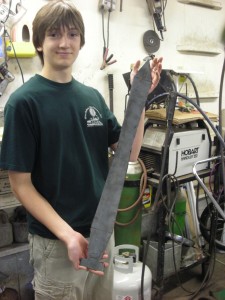 The hilt was made as two separate pieces that were clamped together and shaped at the same time. Most shaping was done by grinding away metal. This process took several days, and a lot of metal was removed. 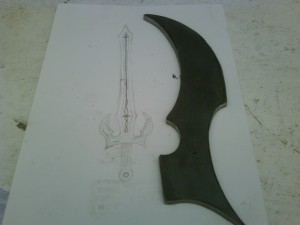 Once the shaping and rough blade edge were cut, the hilt pieces were welded on, and then the blade could be honed and refined by hand. This process took a long time, much longer than I had anticipated. The welding was done by my father who has more experience with a MIG machine than me. I then ground down the weld seam, and hand finished the blade, then polished the entire blade. 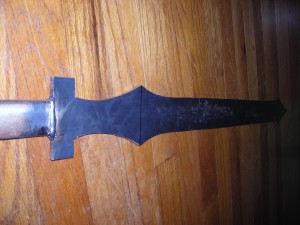 The handle is a leather wrap and a twisted copper insert wrapped inside of the leather handle. The sheath is also a leather strap, stitched around a thin steel piece keeping the openings shape and keeping the sheath straight, holding the rough shape. 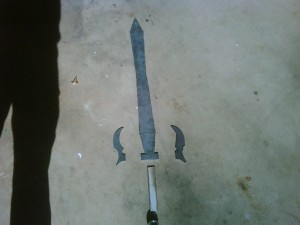 The whole project took a couple weeks, with several hours a day invested, and was well worth the effort. The blade was intentionally left at a not-quite-so-lethal sharpness. This was done so that I could show it off and wave it around, however, it is sharp enough to still be a formidable weapon in the event of a sudden zombie outbreak. 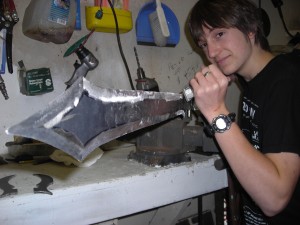 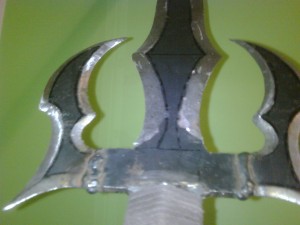