A friend of mine and I worked together one summer to make a replica of Daft Punk’s Thomas helmet. But, we decided to go all out, and make a mold so that we could reproduce them, as many as we wanted. So, we decided to make a mold and cast them from resin. It was an awesome experiment, and a great exploration of slush casting. You can see the mold making process pictures here.

So, at the end of the summer, we each walked away with our own casting. The race was on! The first to finish and light the helmet got to be the first. Unfortunately, I lost the race, as  my friend painted and installed LEDs in the visor long before I had gotten mine going. So, I decided that by way of revenge, I would go way over the top. I decided to cut the ears off, cut the cheeks out, and cut the mouth out, then light it all with RGB LEDs, and top it off with a speaker system and an awesome custom paint job.

I decided to go with color-shifting paint, as Rustoleum now has a spray can version, and I got two little desktop speakers that I could daisy chain together. I cut out the ears, and installed some 1/4″ thick lexan, with notches to install LEDs behind, then cut out a hole to mount the speakers. The mouth was cut out and 4 LEDs installed, similar to the cheeks. 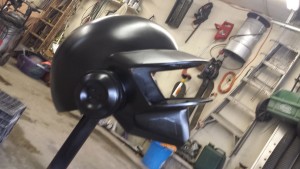 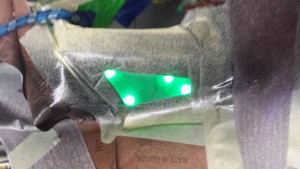 The Rustoleum color-shifting paint requires a black base coat, and works like a clear coat with really fine flake in it that reflects light differently depending on the angle, so the black base coat went on, a very thin layer covering the sections to be lit. The lights are controlled by an Arduino, set up so it automatically increments the lighting pattern of each section (ears, cheeks, mouth) on a time interval that you can set from 1 to 10 minutes. I did this so that I could walk into a room with all the LEDs off, and let people admire the mask for some time, and then suddenly, the lights automatically come on by themselves. The Arduino and LEDs are powered by a rechargeable NiCd 9V 200mAh battery, and I can get about 1.5 hours of run time out of a full charge. 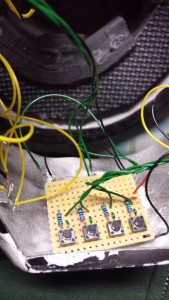 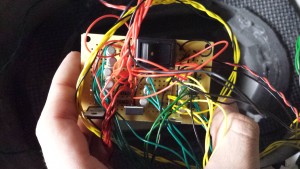