I built a Raspberry Pi based arcade system off of a few parts that I had lying around, and a few that inspired the project.

The arcade cabinet  was a GoodWill find ($5) from an iPad arcade emulator. The cabinet had enough buttons to emulate a fair number of systems however, so it needed an upgrade. Using a Raspberry Pi Model B+ with a Wifi dongle, and a screen out of an old notebook laptop, the cabinet was turned into a full system. The low resolution of the screen suited the low resolution of the games emulated.

The system could emulate SNES, NES, Atari, and GBA systems, though some games played very strangely without their classic interfaces. Totally worth the build however, as it was surprisingly easy to setup and configure the RetroPi OS and start uploading games to it. 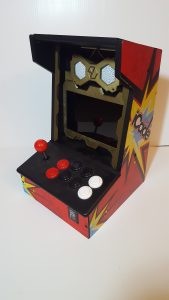