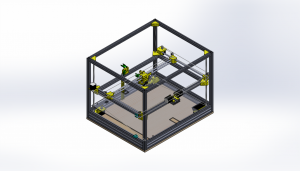 For years now, I have been diving into projects, taking on a whole lot of work and starting up something that I know very little about. I feel like this is one of the best ways (for me at least) to learn about something new. When you dive into something new, you have to immerse yourself in the project, and you become invested. Some of these projects for me have been creating things like robots and rapid prototype CNC machines. These projects all exposed me to many different new topics, be it mechanical design, different programming languages, fabrication methods and more.

Some of these projects are too large for a simple blog post, so they’ll get their own page, detailing the projects more. Please be aware that some of these projects were documented after the fact, and may not be the most thorough documentation of the design process. That being said, new posts should be documenting new projects, and I will do my best to document these as they are underway.

For example, my first hobby robotics project used a BASIC Stamp processor, and I only knew a simplified version of C++ at the time, with a lot of pre-built libraries to boot. Learning BASIC was a real challenge, and has made me really appreciate the Arduino platform and IDE. I needed to keep the project simple enough that I could manage it, and afford it. So, I decided to build a remote control car with a 4 degree of freedom claw on the end of it. The intention was to have two sensors on the claw, one sonar sensor for searching for distant objects, and one on the claw itself for searching for objects immediately in front of it. The driver would be able to drive the car up to an object, and the stamp would detect and attempt to pick up an item. The driver could then drive the robot back with the object in tow.

Unfortunately, this project took a seat on the back burner, as it would have been a lot more fun to have had a remote that could handle controlling the arm remotely, and then being able to toggle between full autonomous mode, and full remote control mode. However, the remote that I was able to purchase had a limited range, and only two channels, one for throttle and one for steering. Thus, implementing any sort of remote control would have been very difficult to do, and the vehicle would always have to remain in line of sight to operate. Because of this, the project unfortunately did not see itself though, though I may return to it one day.