This is the old version of the printer, to see the MK2, visit: Rapid Prototyper: EasyBake V2

This project encompassed the summer of 2015, after a friend of mine spurred me to build a 3D printer. I had been going back and fourth about making one for some time, but they are more of a tool than a design project. I decided that if I was going to take the time to build my own machine, I was going to do it right, and go all-out. So, I designed a prototyping machine that is capable, and met a few requirements:

-Total costs about as much as a printerbot

-Having a print volume much larger than that of a printerbot

This allowed me some freedom, as printerbots are on the more expensive end of consumer level FDM printers. Not to mention, that with the emergence of the technology has come a great reduction in the costs of the components. The lack of high stress from lateral pressures of traditional machining technologies allowed the design to remain lightweight, and simple. Relying on low cost linear ball bearings and standard 10mm rod, the main resistance the machine will deal with is the friction of the bearings and the acceleration of its own components.

Other machines that have seen similar cost reductions are laser engravers. Diode lasers are low power, but capable of engraving, and this leaves them capable components. Laser engravers also do not encounter any tooling resistance, allowing seamless integration into 3D printers, as the components will have to deal with very little stress.

The resulting CNC machine ended up with a 22″x20″x10″ print volume and a 2.8W laser engraver capable of engraving the base area of the print volume, 22″x20″. Capable of printing in PLA, ABS, Nylon, and more plastics, and capable of engraving woods, foams, paints, anodizing and more materials. As such, these prototyping capabilities have not yet been fully explored. Prints as large as 10″ square, and 10″ high have been tested, and engravings of soft woods have been experimented with.

Designing the printer (and waiting for shipping of parts) took a fair portion of the time needed to construct the printer. The frame is 80/20 aluminum extrusion, allowing a versatile and strong construction. The plastic bearing mounts were printed on a friend’s Prussia I3, printed from ABS. The print bed is heated with silicon heater mats, and uses a 3/16″ tempered piece of glass supported by a 1/4″ aluminum plate. 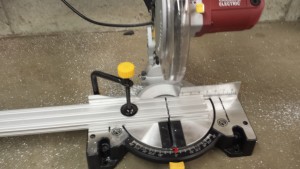 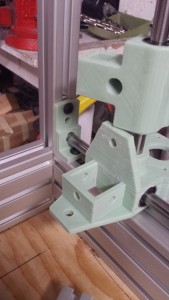 The components were all test fitted together throughout the construction process. This allowed design checks and fitting together of the components. The ABS prints were made on a friend’s Prussia I3, and were of decent quality, but needed some finishing. Sanding to final dimension and removing burrs and brims from the parts was the typical finishing needed. 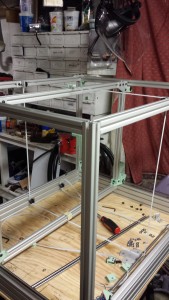 Homemade drive pulleys were turned first from aluminum, and then from brass. These were to be the drive pulleys used in the ‘cold end’ of the extruder. The teeth were cut initially using a dremel and cutoff wheel at a sharp angle, but later an 1/8″ endmill was used to cut the teeth into the side of the drive portion of the pulley. A problem was encountered where the plastic was not feeding properly, and this issue was initially (and incorrectly) attributed to these pulleys, so they were replaced with commercially available hardened steel pulleys. The issue turned out to be that when the tubing is removed from the ‘hot end’ of the extruder while hot (to change out the plastic, for colors, materials, etc.) a portion of plastic mushes out and stays in the heater block. If the action was repeated enough, then a block of plastic built up into the heatsink, where the plastic never melted again. These bits of plastic had to be drilled out, but are now clear and the ‘cold end’ extruders are extremely overkill strong for their job. 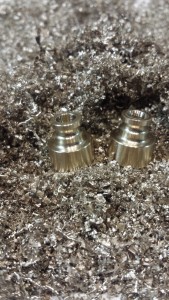 The idler pulley (a bearing that presses the filament into the teeth of the drive pulley) was supported by a plastic arm that tended to flex, and with the increased spring strength needed to compensate for the plastic buildup in the ‘hot end’, the support arms flexed enough to alleviate pressure from the filament. Thus, they were replaced with machined aluminum ones. 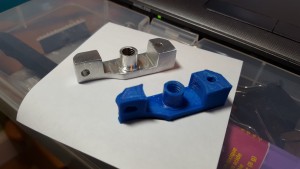 The laser diode is a very small package that is separately driven by an external controller. One of the main ways that these lasers can degrade is by overheating during operation. Thus, short operations are recommended at high power settings. For most of the applications of this machine, the medium power setting will work. However, given the size of the machine, the operating times may be very long. Thus, a heatsink was machined down to increase the surface area available, and was used to mount a cooling fan. These additions should greatly increase the life of the laser diode. 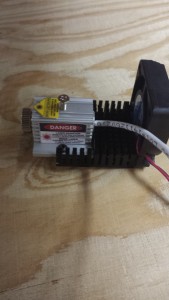 One of the first test prints can be seen, before the purchase of a tempered piece of glass, or before the purchase of higher powered silicon heater mats. The test prints were done with ABS plastic and glue sticks on the glass surface. From these tests it was determined that with such a large aluminum plate below the print bed, an insulation sheet and larger high power heater mats would be necessary. This is due to the thermally conductive nature of aluminum, as it tended to sink the heat away from the print bed before the actual glass heated up. 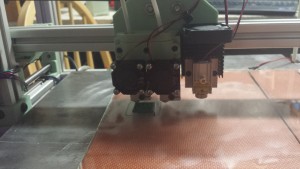 Up and running, Repetier Host was the initial host controller of choice. running off of an old laptop, the printer was a capable machine. Though, it seemed to lack the ability to function as a stand alone machine. Thus, a Raspberry Pi has been set up as the controller, and is set up to boot and run OctoPrint. The pi boots automatically to chromium and opens up a browser so that the pi and the printer can be controlled locally and remotely. This is somewhat taxing on the raspberry pi, however, features such as the gcode viewer have been disabled to improve the performance, as this is not a necessary feature while running the printer. 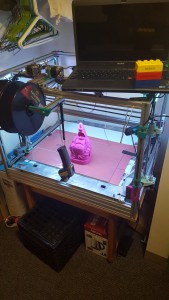 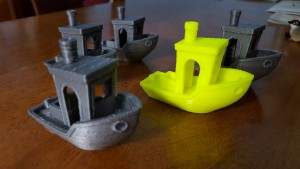 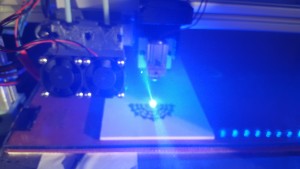 All in all, the rapid prototyping machine has seen improvements throughout its design and fabrication, and has printed many improvement parts for itself, and will continue to be improved over time. Currently, the limiting factors are the printing speeds. Acceleration limits are low relative to other printers, and to keep these acceleration times low, the print speed is also kept low. Plans are in place to improve the print times of the printer however, and changes may take place soon, stay tuned, that’s not all folks.